Here’s the results of my analysis of this object. I started by cleaning up and detrending the raw flux from Q1 to Q14. As our Planet Hunters had suspected, this star has at least 5 planets. There are TTVs in at least one planet, planet e. Planet f is probably in the HZ. Planets c and d are not described in the literature.

There are short cadence studies of this star from about BJD 809 onwards (Q9?) but strangely enough the transits of the smaller planets are very difficult to pick out in these data files.

The light curve is here: 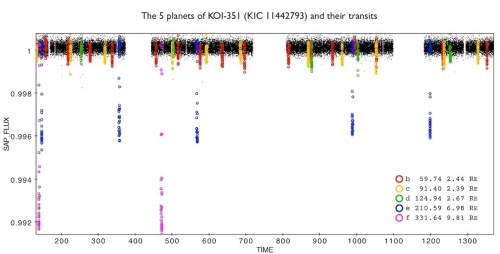 I folded the processed curve at each of the 5 periods, marked off the transits and ran the data through TAP to get light curve models for planets c and d.

Here’s a graphic of the relative sizes of the planets:

A scale diagram of the system with orbits of Earth (blue), Venus (orange) and Mercury (red) superimposed. Note how close b and c are to each other. All 5 planets fit just within Earth’s orbit. Could the proximity of planet f cause the TTVs seen in e? Or is there something else further out there?